This book will not be like the other books I have written. I will introduce to you a class of spiritual being unlike those you have dealt with before. These beings, at least according to the second largest religion on this earth, Islam have incredible sway over our daily lives. In fact, they may even be considered demons to some in the west. I will explain that in a moment. As I Have stated in many of the other books I have written, humanity since the dawn of time has been in communication and in many ways obsessed with the forces of the spirit world. We all know deep in our bones that there is more to the manifest world. Yet, in all this knowing we still feel that it is somewhat elusive to us. We go out of our way to connect to the spirit world or go out of our way to avoid it altogether. For some, the very thought of a spirit world that interacts with our own is one of the most frightful propositions. For others, it is quite enriching. To know that we are surrounded by spiritual beings adds a kind of magic to our day to day existence. If you are an occultist, then you are in constant interaction and know very well, that everything around you and all the actions of the universe are imbued with magick. In fact, all things are derived from magick in some way, shape or form.

For most of us, we tend to hyper focus on beings such as Angels, demons and spirits of the dead etc. But, as you probably know, there is a lot more out there than that. There is a class of spiritual being that is neither angel nor spirit of the dead. But not exactly demons either. They are a kind of parallel entity to humans. The Islamic Satan is one of these beings; which is a departure from the west where the devil is an angel gone rouge. These entities have many facets similar to humans which we will discuss later. They are so intertwined with us that it is impossible to go about our days without having some interaction with them. When things go bump in the night we assume it is one of the 3 classes of spiritual entities we are most familiar with, demons, angels and spirits of the dead etc. However, more often than not, they are neither of these 3. They are unto a class of their own. In folklore they are known as Jinn also known as Djinn.

Jinn were brought to light via the religion of Islam, although texts do mention them before Islam. It is from Islamic stories however where we get a clearer picture of what the Jinn are. In fact, modern ideas of the Genie in the bottle is directly from stories about the Jinn. The word genie is derived from the word Jinn. Aladdin when he rubbed his lamp was speaking to a Jinn.
In the west, Jinn are very much misunderstood. Often we associate them with demons or devils. Yes, some do have malevolent intent, and as I mentioned the “devil” in Islam is a Jinn, but there are many Jinn who are “good”. They are more like humans than you can imagine, yet they have abilities we do not have, but can harness.
In this book, we will discuss not only the nature of and type of Jinn, but also how to bind them to work for you. Before I continue however I’d like to give a warning. Jinn, like other spiritual entities need to be communicated with care. They can grant you what you want, but be careful what you ask for. Jinn are notorious pranksters, you might get what you want, but in a way you really would rather not have it…You have been warned.
With that said, let us go deeper into the world of the Jinn. 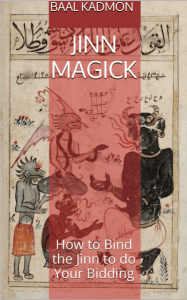 Available On Kindle and Paperback

Kindle: Jinn Magick: How to Bind the Jinn to do Your Bidding

Paperback: Jinn Magick: How to Bind the Jinn to do Your Bidding