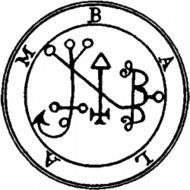 The frequency used is BETA with a musical accompaniment, which will put you in a state To fully conjure King Balam.

Powerful king of Hell who commands over forty legions of demons. He gives perfect answers on things past, present, and to come, and can also make men invisible and witty. Balam is depicted as being three-headed. One head is the head of a bull, the second of a man, and the third of a ram. He has flaming eyes and the tail of a serpent. He carries a hawk on his fist and rides a strong bear. At other times, he is represented as a naked man riding a bear.

Save this product for later